[V2-190]- PartyGaming : SNG Jackpot : Considered HU if the tournament ended on the 1st hand
[V2-197]- Pop-up / Hand list > Replayer was showing another hand in LIVE
[V2-211]- Multi Screen : In a certain configuration, moving the HUD Menu to secondary screen was impossible
[V2-263]- Replayer : HUD was not visible at first opening
[V2-276]- For large databases, opening repeatedly the replayer resulted in memory overload
[V2-281]- The manual import window could be oversized
[V2-298]- Winamax : GoFast : HUD Options : "Do not display the HUD for the Hero" did not work
[V2-301]- HUD : The labels were moving alone
[V2-302]- HUD Options : Uncheck "Synchronize labels" did not work
[V2-303]- PokerStars : Import : The logs sent by the room were not imported
[V2-304]- HUD : menu actions were triggered after the menu was moved
[V2-307]- Hand Module > List : Sometimes the replayer did not show the requested hand

[V2-271] - Winamax : GoFast files were not copied in the processed folder

[V2-279]- On Winamax 10 handed, the HUD did not update for opponents when data filter was "All hands"

- Bountys import correction, due to a change in Pokerstars hand history format

- Filtering hands with a name starting by "ID: " (space after :) caused the hands list to load forever.
- Winamax Mix Max import problem solved
- "Last hour" filter did not work as expected
- Grouping hand results by percentage was not working properly for all ranges
- Opening the replayer from the profile hands list was showing a wrong hand
- Filtering opponents with a player was not working

Correction of the bug Winamax bug that changes the number of players while playing.

BACKUP :
- Reminder popup was always displayed, even if "Don't ask me again" was checked".

Sessions - Heads up : added pseudo in the session's name

- new hero method (hands against oppoents in Heads up)

Ipoker :
- automatic detection of the new history folder for Unibet.fr

HUD :
- correction if revenge on Pokerstars in SNG HU

Stats :
- correction when no profile is selected

- Correction of import for Pokerstars satellites

- Correction of import for the Jackpot SNG on PartyGaming

- Correction of the HUD for the 10max tournaments on Winamax

- Improvement of dates filters
- HUD is now started on tables that are already open when Xeester starts
- Module Sessions>List : new sort by End date
- Implementation of Pokerstars/FullTilt restrictions when playing :

- Sessions : new column "last hand"
- Cards : use of a 4 color deck
- HUD options : new feature "Hide the HUD when started"
- HUD : possibility to display the category on the HUD border

- Séparation of HUD and Profiles. A HUD now references a profile as external popup
- Improvement of the Stat module
- Possbility to backup/restore online the database
- Simplification and improvement of performance of the Opponents module

- Errors on gains for some freeroll satellites of Winamax

- HUD on Full Tilt Poker did not work anymore, due to a software update
- Bug on some badges, causing a HUD freeze

Replayer :
- Logs on the right side

- Official release of X2, the next generation of Xeester 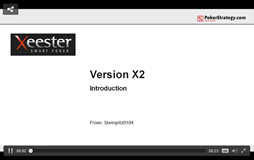